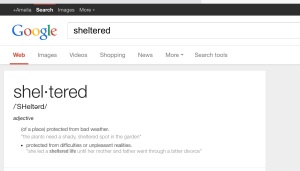 We’ve all experienced the wrath of mean kids, I think. Or mean adults. Either firsthand or vicariously through others, maybe now, sadly, even through our own kids’ experiences. There was a boy, Andy, that always called me “Egg Nog” when I was in elementary school. I don’t know why he did it but it bothered me, hurt my feelings. It wasn’t a good nickname. I was a little scared of him. He was scrawny and probably like a boy version of me. Maybe he was being made fun of at home. Maybe he didn’t want to be the target of others. I also got made fun of for my big feet, skinny legs and big teeth. I’m sure a lot of kids made fun of me for plenty of other reasons too. I remember a kid telling me one time that my hair was “growing into a triangle.” Implying that my too thin of hair maybe needed a trim. I think I got a little paranoid after that “bob” my mom gave me and I vowed to grow it out indefinitely. Not the best look, I guess, however my mom could French braid it. My husband constantly had his lunch stolen from him in middle school. He was bullied in more physical ways than me but the punches and shoves seep just as deeply into your emotional gut.Probably deeper. He actually met his best friend in the school bathroom. Mike was being bullied. And my husband happened to walk into the bathroom and say something. His scrawny bodied, thick glasses brave self stood up for the guy who we later named one of our children after.

Kids can be cruel. And so can the parents who should know better. They should recognize that their child keeps hurting other kids’ feelings. Name calling. Bullying. Excluding. Really? Already? My oldest kids are six years old. This seems crazy. And sad. And just wrong. Perhaps a lot of parents are worrying and focused too much on all of the little things. Tunnel vision. Look at the big picture. Does it really matter what your child turns out to be if nobody wants to be around him or her, by choice? I used to get so annoyed with people asking me how my babies slept. Instead of about their personalities or something, anything else. Yeah, if being a good parent consisted of how well your kids slept and ate, I may have been fired a long time ago. I don’t want to just raise a bunch of good sleepers and good eaters. I want to raise kids who are awake, aware, and alive to the life happening around them. The people everywhere. The happy, the sad, the angry, confused, scared, everyone. Awake for the really awesome, joyful, life-giving stuff and the sad, real, painful hard-to-understand stuff too. All of it.

I want my kids to be the ones who include others, look out for others who are alone, defend the weak, the picked on, the silent and scared ones who maybe hope to go unnoticed. I  remember taking my twins to a playground when they were a little over two years old. There were a couple six to eight year old boys playing. My boys wanted so badly to play with these big kids. They followed them around. As quickly and subtly as their little uncoordinated toddler bodies could. And I stayed close, not hovering but within earshot. These two older boys began telling my kids to go away and started calling them names. Their parents did not intervene because they were not even close enough to know what was going on. Despite my irritation and motherly instincts to engage with and say something unkind, I chose instead to question and talk with these boys. I explained why my boys thought they were so cool, they had big cousins that play with them who they love. I told them that they my little boys may learn that “big kids” aren’t nice if they keep calling them names and running away from them. I asked if either of them knew any older kids that they liked to play with. I learned that they both had older siblings. They engaged readily in conversation with me. Still no parent appeared. By the end of our talk, they decided to let my boys chase after them constantly stating their names, because that was about the extent of their conversation skills. I thanked them for letting my boys play, even though they were younger than them.

Last year, I sat with my boys at their future school’s back to school night. It was hard. Eye opening. Unbeknownst to him, one of my hotdog eating sons had ketchup on his face. Two little girls snickered across the table. Relatively harmless but it drew attention to one of my fears. I handed my son a napkin. And I hurt a little, I mean a lot, knowing that I would drop my sweet innocent, protected five year old boys off everyday at this huge school. The littlest kids in the school. I could not begin to know or witness or defend their every move or the words or gestures thrown at them from others. I wanted to put a giant bubble around them. And there were many days when my heart just ached in the pick up line and on the ride or walk home, hearing that they had a bad day, knowing that some kid hurt their feelings. We would talk about it. I would try my best to build them up, but honestly, I didn’t want to send them back the next day. What kind of mom sends her children right back into a lion’s den the day after an attack?

I have had to have serious talks too frequently with my boys lately after incidents at parks. These have provided huge, rather exhausting learning opportunities. I don’t climb up the equipment (usually) but I try to watch and recognize when kids are being unkind, my own included, not allowing others to play, blocking the slide, etc. Then, I typically intervene. Try and make things better, temporarily. My boys and I will talk about things that happened on the way home. Not every time but a lot of the times. I think I feel a little pressure, like I’ve got this small window of time to help explain why its important to treat others with love, acceptance, understanding and compassion. I don’t want the window to close without them recognizing and feeling the difficult yet rewarding side of doing the right thing, the hard thing. Even if that’s walking away sometimes. Or more importantly, walking towards those who need us the most.